For a rapid cold break, we need to cool the hot wort quickly after the boil. The two most common methods of doing so are: -. 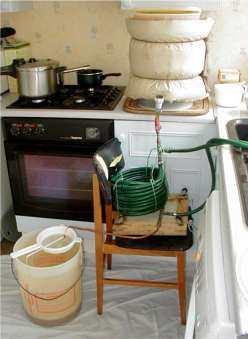 This system comprises a thin copper tube through which the hot wort passes either under gravity or by pumping. The thin tube passes through a larger tube (in my case a garden hose) through which cold water is passed. The heat is transferred from the wort to the cooling water, which then flows away down the sink (some people save the water for washing equipment, as it comes out quite hot.

The picture shows a counterflow chiller in action. The hose feeding in at the bottom is connected to the cold tap, and the hose at the top takes used water away to drain in the sink.

This comprises a large coil of narrow bore copper pipe which, as the name suggests, is immersed in the hot wort, and cold water passed through it until the wort is cooled to the desired temperature.

Immersion wort chillers are easier to make and easier to clean (and so very popular amongst home brewers), but probably aren't as efficient as the counterflow type.